Specific “Distributed Ledger Technology” (DLT), known as Blockchain, is taking center stage in all economic sectors due to its potential of transformation.

Blockchain’s ability to disrupt the role of intermediaries in transactions, simplifying processes and creating new operating models and workflows leads to deep cost reductions and potential increase of profits for companies operating within. Blockchain introduces features which have never been possible before: immutability of transactions and the decentralization of record keeping.

All these features, however, raise some legal and regulatory challenges in terms of data protection which should be addressed.

In 2016 the European Union passed the General Data Protection Regulation (GDPR) in order to give European residents more rights and control over their personal data. It came in to full force on 25 May, 2018, and affects any company holding data relating to private EU citizens or residents, whether or not the company holding the data is based in Europe. Compliance is essential, as penalties can be as much as the higher of 4% of worldwide turnover or 20 million euros.

The regulation has profound significance to blockchain systems in two main regards:

In this article we look at all of these issues, which at first sight may seem insurmountable, and we examine some potential methods for maintaining a blockchain whilst complying with the GDPR. We will also look at the issue of pseudo-anonymity, and how in open blockchains in particular, compliance may be simpler than with a traditional database based system.

Public vs. private, open vs. permissioned.

In order to grasp the issues faced by blockchains that will not affect traditional databases, it is important to be aware of the different kinds of blockchains that have been proposed over the last few years. The terms that need to be understood are: public versus private, and open versus permissioned. 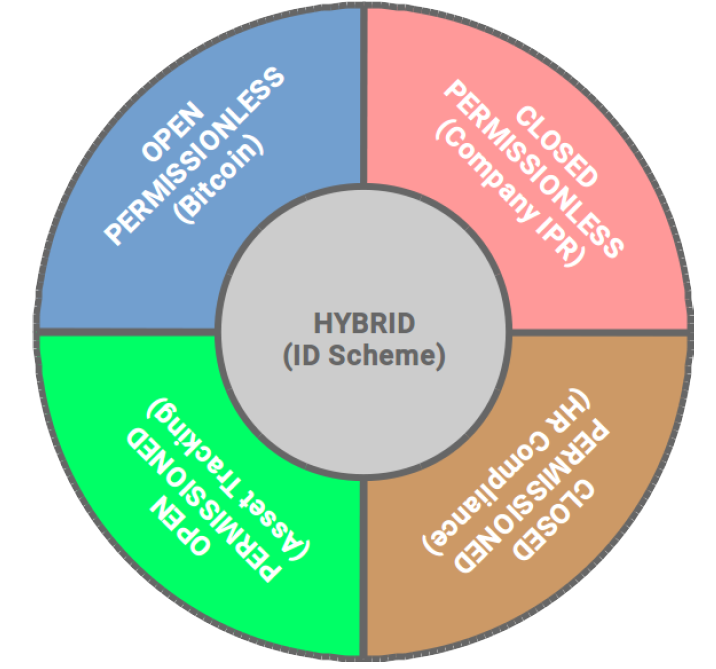 One of the great benefits that blockchains bring is tamper proof recording of data. This gives blockchains the ability to record financial transactions or other data in a manner that allows subsequent auditing of the data for veracity and authenticity, and ensure that, for example, when a transfer of ownership or value is recorded, the transaction cannot subsequently be reverted. In essence, it is the tamper proof nature of blockchains that allows them to create cryptocurrencies, by making unique unforgettable digital entities.

As they are generated, the records or data are submitted by clients to the peer-to-peer network running the blockchain, and nodes on the network package the unprocessed data into blocks, which are added to the existing chain at regular intervals. Thus the chain grows over time.

Furthermore, because a complete record of the chain of blocks is kept by all nodes maintaining the blockchain, if an individual node has a copy of the data that has been tampered with, not only can this be detected, but a valid copy can be requested from one of the other nodes. The node with falsified data may even be blacklisted by the remaining nodes and expelled from the blockchain system. Because the data on the blockchain cannot be deleted or modified at a later date, at first sight it appears that it is not possible comply with some of the edicts of the GDPR, in particular the “right to erasure”, whereby an EU resident may request that their details be deleted from the system. 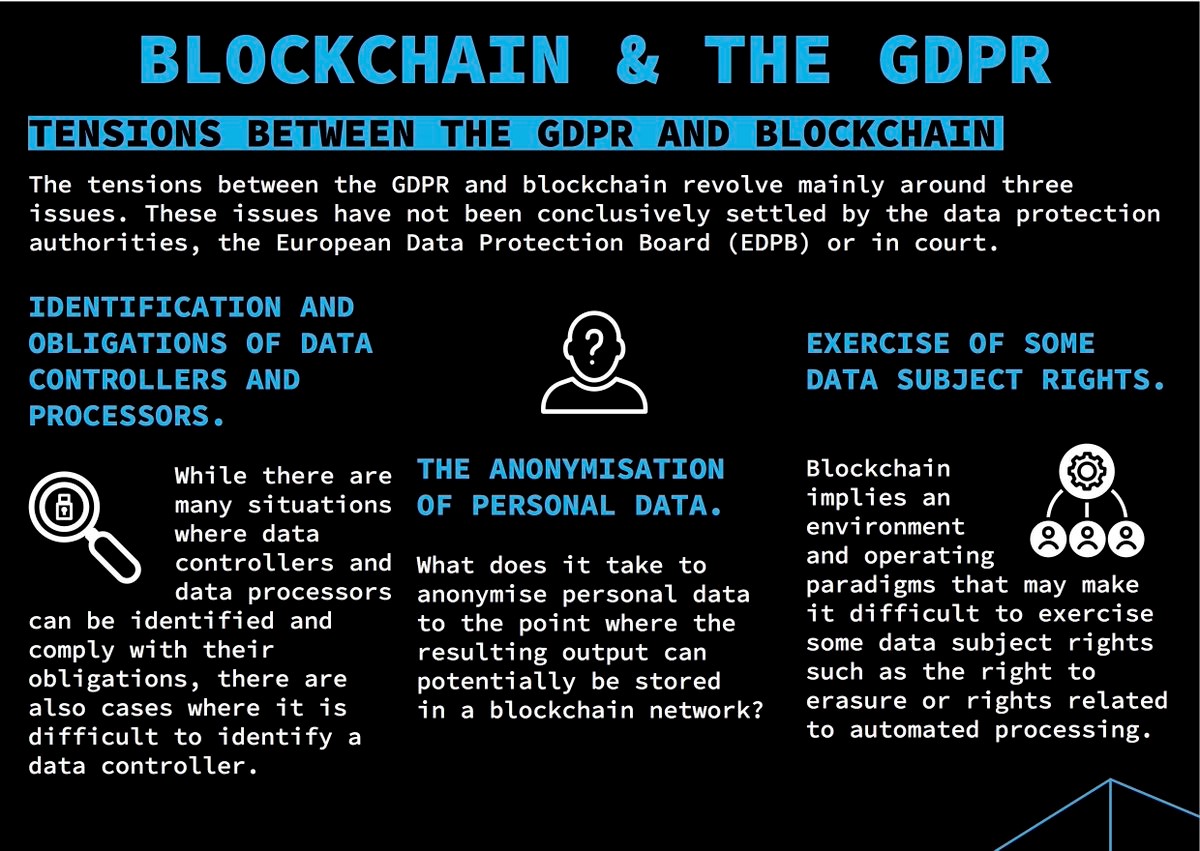 HOW TO RESOLVE THE CONFLICT.

Having detailed the technical properties and capabilities of blockchains that are relevant to the GDPR, we now turn our attention to possible solutions to the problem of reconciling the GDPR edicts with the blockchain system.

The right to be forgotten.

Although there are a substantial number of conditions under which private data may still be retained, for example for compliance with superseding legal obligations, when the data is in the public interest, or when freedom of expression takes precedence, in general EU residents may request that their data be transferred to another data storage provider, or even deleted entirely. This clearly presents a problem to a blockchain system, in which data cannot be deleted. There are number of solutions: 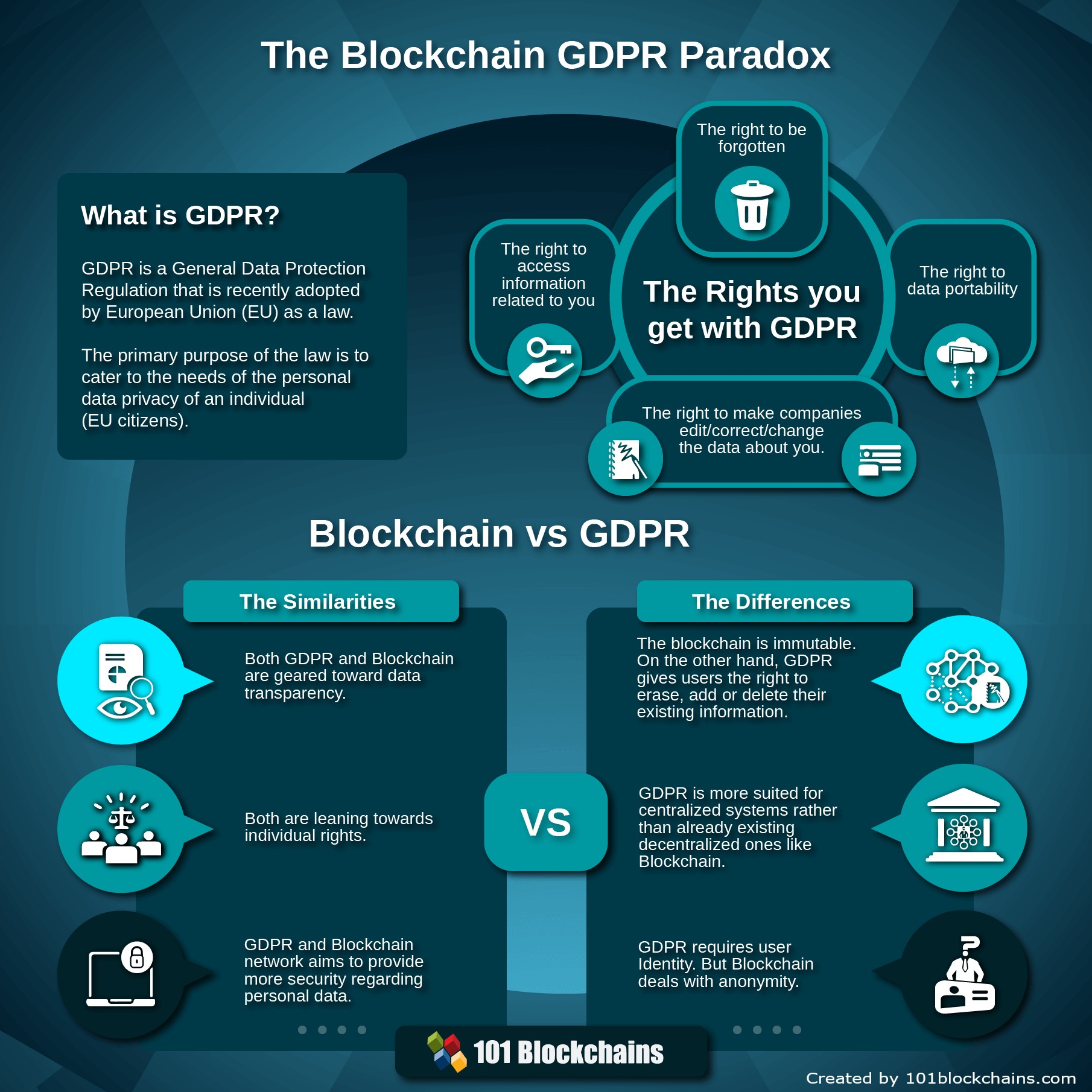 Given that the ruling grants EU persons the right to contest automated decisions, and smart contracts running on a blockchain are effectively making automated decisions, the GDPR needs to be taken in to account when developing and deploying smart contracts that use personal data in the decision making process, and produce a legal effect or other similarly significant effect.

Decentralized apps and the GDPR. It’s not all plain sailing on the other side either. What if a decentralized application (Dapp) is launched anonymously on a public blockchain, for example on Ethereum, which gathers information on citizens, collects and redistributes funds, and makes automated decisions based on the data and funds available? According to the EU ruling, users of the Dapp have the right to have their data expunged from the blockchain, and to contest decisions made by the Dapp. But in a true Dapp there is no board of directors or CEO to hold accountable, no bank account that can be frozen, and no data controller to petition. Banning the relevant blockchain and enforcing the ban by putting pressure on internet service providers and VPN suppliers is unlikely to be effective. As the old adage goes – the internet treats censorship as a malfunction and simply routes arou