Types of networks that exist to develop projects with Blockchain: open, federated or private. By Miguel Ángel Pérez9 min read

When we talk about the value of open source technologies, we are thinking about the reuse of the code and the possibilities that its opening creates to adapt one solution to another. Blockchain is a great example of this potential, already with many ramifications generated from the source code of Ethereum and Hyperledger, to name a few examples. However, the blockchain technology is not necessarily “open” by default. This article will explore the different types of blockchain to help recognize and distinguish between them.

In general terms, blockchain is a distributed registry that is used to store information in the form of transactions. Its value consists, among other things, in the possibility that all participants have a copy of the complete record, which is immutable, and participate in the validation of transactions. While there are certain elements such as transactions, blocks and hash codes that all blockchain have in common, the variety of options and flexibility when deciding how is the administration of the network, who are the participants, what is the degree of decentralization or what is the level of transparency, determine what type of blockchain is appropriate to use. 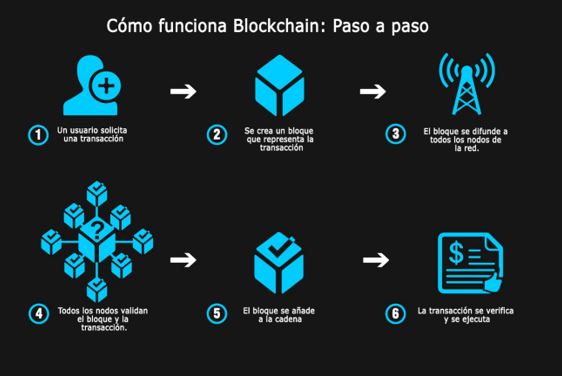 Some of the functionalities most commonly associated with the blockchain, such as decentralization and transparency of data or consensus protocols, do not occur in all the blockchain, and the rules for validating transactions, admitting participants or accessing the blockchain change drastically depending on the network .

The idea that arose was that block chains could be used for any type of value transaction or agreement between two parties such as P2P insurance, P2P energy exchange, P2P transport compartment, etc. With this intention, the Ethereum Project decided to create its own blockchain on July 30, 2015, with different properties than Bitcoin and deploying a layer of intelligent contracts to offer a radical new way to create online markets and programmable transactions. On the other hand, private institutions such as banks realized that they could use the central idea of ​​the blockchain as Distributed Ledger Technology (DLT), and create block chains with permits (private or federated). That is why the term DLT emerged as a more general term.

To understand what are the different alternatives and their differences, a generic classification can be made in three groups: public, federated and private. There is a fourth group, Blockchain as a service (Blockchain-a-a-service or BaaS) which we will discuss at the end. 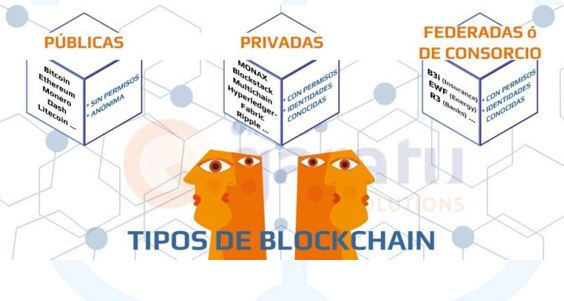 On the one hand, private blockchain are valid to solve problems of efficiency, security and fraud within traditional financial institutions, although they are not likely to revolutionize the financial system. On the other hand, public blockchain have the potential to replace many of the functions of traditional financial institutions with software, modifying the way in which the financial system works; but they do not suit the needs of the private company.

Public blockchain are those to which anyone has access. In general, these networks are transparent and users are anonymous. No participant has more rights than the others, so there are no network administrators. The best-known public networks are Bitcoin, Ethereum and Litecoin, although others are beginning to emerge, such as IOTA (which is not considered a blockchain as such), NEO or Cardano.

A public blockchain network is completely open and anyone can join and participate in the network. The network typically has an incentive mechanism based on game theory that encourages more participants to join the network.

One of the questions that comes to mind is how decisions are made in public blockchains. The answer is that as already mentioned, decision making happens with several decentralized consensus mechanisms such as Proof of Work (PoW) and Proof of Stake (PoS), etc.

Anyone can download the code and start running a public node on their local devices, validating transactions on the network, thus participating in the consensus process, the process to determine which blocks are added to the chain and their current status.

Anyone in the world can send transactions through the network and expect them to be included in the blockchain if they are valid.

The procedure to participate is to download the corresponding application and connect automatically with a certain number of participants or nodes, to which the most updated version of the chain of records is requested, which may take minutes or hours. Once the user is done with the updated copy of the entire chain, he has the same rights and duties as the rest of the participants when proposing and validating transactions.

The way to validate transactions is through what are known as consensus protocols. Randomly one participant is chosen at a time to propose a new block. If the chosen one proposed a block with erroneous information, the rest of the participants could reject it. To encourage the nodes to propose valid blocks, many networks give reward in the form of a cryptocurrency to the node that proposes a block when it is accepted. The nodes that compete to validate the blocks, finding the valid hash of the block, are known as miners. The work of mining in public networks is the heart that keeps them alive. It is the responsibility of the users or mining nodes to continue carrying it out. 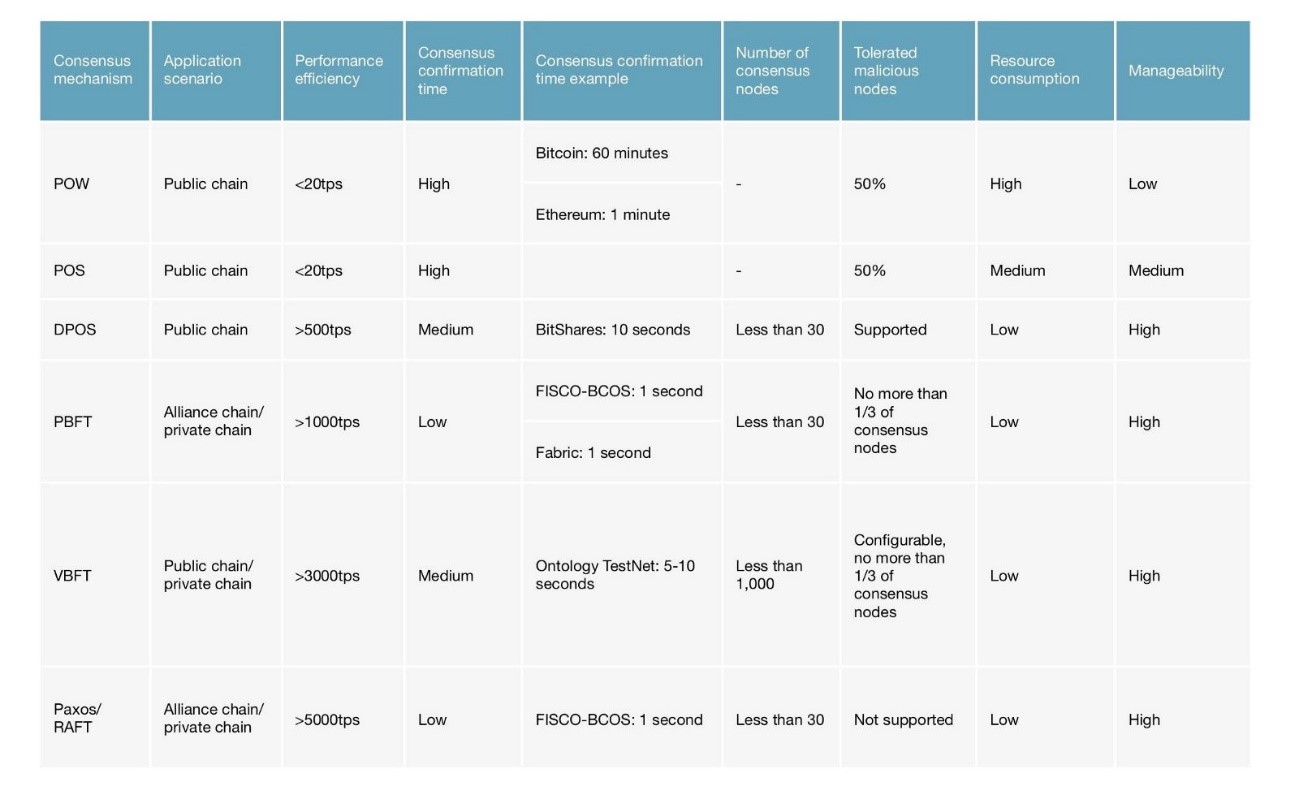 The federated blockchain networks are the most requested when building shared solutions for governments, companies, and associations. In general, they are not open to public participation, but a certain number of organizations, entities or companies are responsible for managing the network as a whole and keep synchronized copies of the registry. The majority access is through a web interface that the administrators make available to the average user, instead of sharing a copy of the chain as in public networks.

A federated blockchain network can be, for example, a good option for industries such as health and finance, where large volumes of transactions between different entities with a high need for trust take place. When designing and implementing a solution of this type, it is essential to accompany the blockchain tool with an adequate strategic plan consisting of defining from who and how they will manage the network to what information they will show to users via the interface Web. In many cases, the user who accesses via web may not have interest or knowledge about blockchain, but may need a platform that involves different entities, a need for trust and transparency. It is important to point out that since their access is via the web and not as “nodes” of the network -that is, they do not have a copy of the chain-, common users will have access to as much information as the administrators decide to show them through the same There will then be options that vary from a high level of transparency to zero transparency.

Unlike public networks, federated or hybrid networks do not reward the user for the creation of the hash through the mining of blocks and do not even have an associated cryptocurrency. The administrators or entities in charge of the network provide the necessary computational resources that fulfill the purpose of generating the hash. 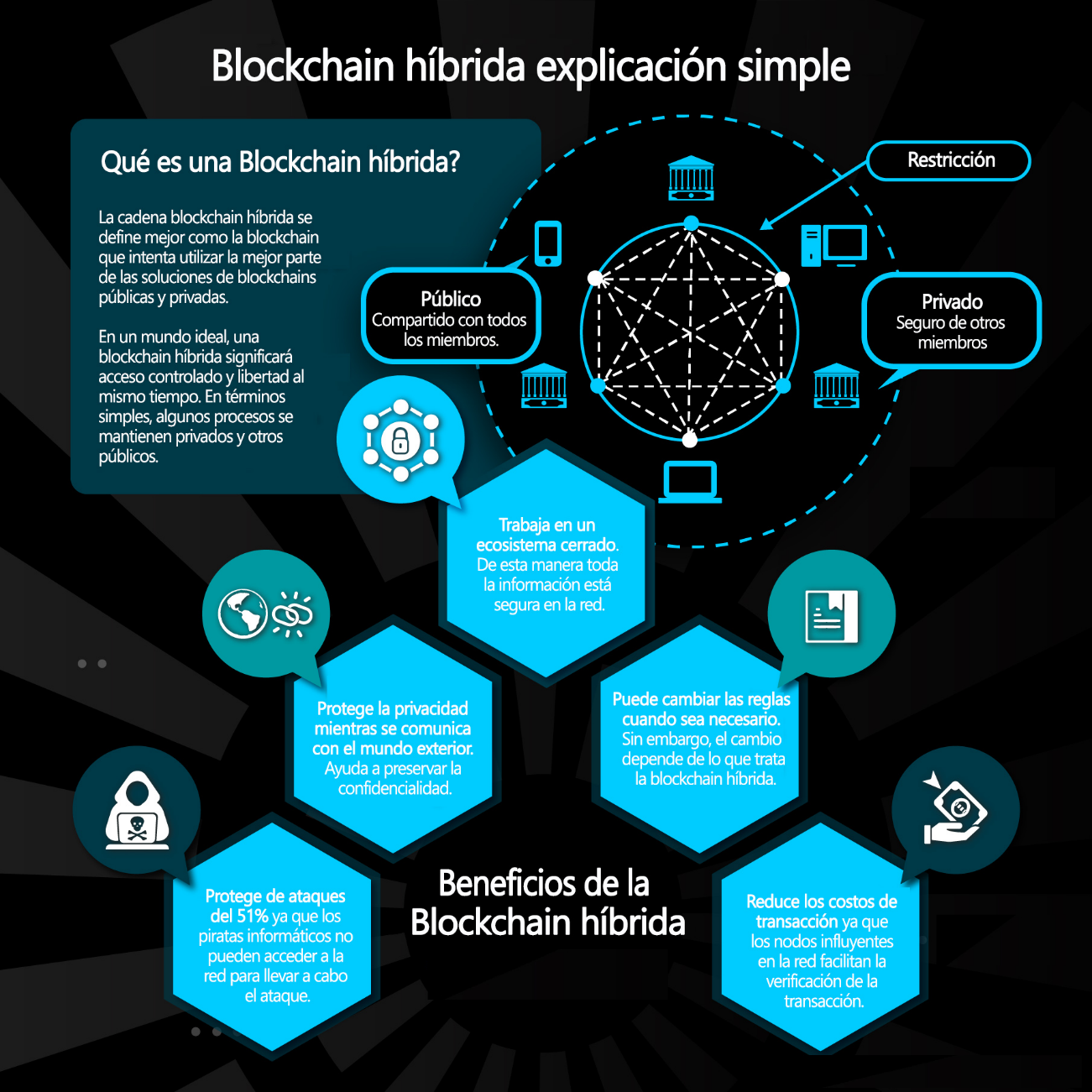 Although federated blockchain networks do not have a participation model open to the public, the software that supports them remains in general open source, which allows the developer community to reuse code in many cases. Some of the most common open source softwares used to create federated networks are Hyperledger, Corda, EFW or Multichain, which allow you to download the blockchain application and program the chain to your liking, deciding who you want to participate and under what rules are regulated. transactions. It is also possible and common to create federated environments making a fork of a public network, thus generating your own customized network.

The private blockchain networks are those where the control is reduced to a single entity that is responsible for maintaining the chain, giving permissions to the users that it is desired to participate, proposing transactions and accepting the blocks. They are the same as the federated but with only one entity in charge. 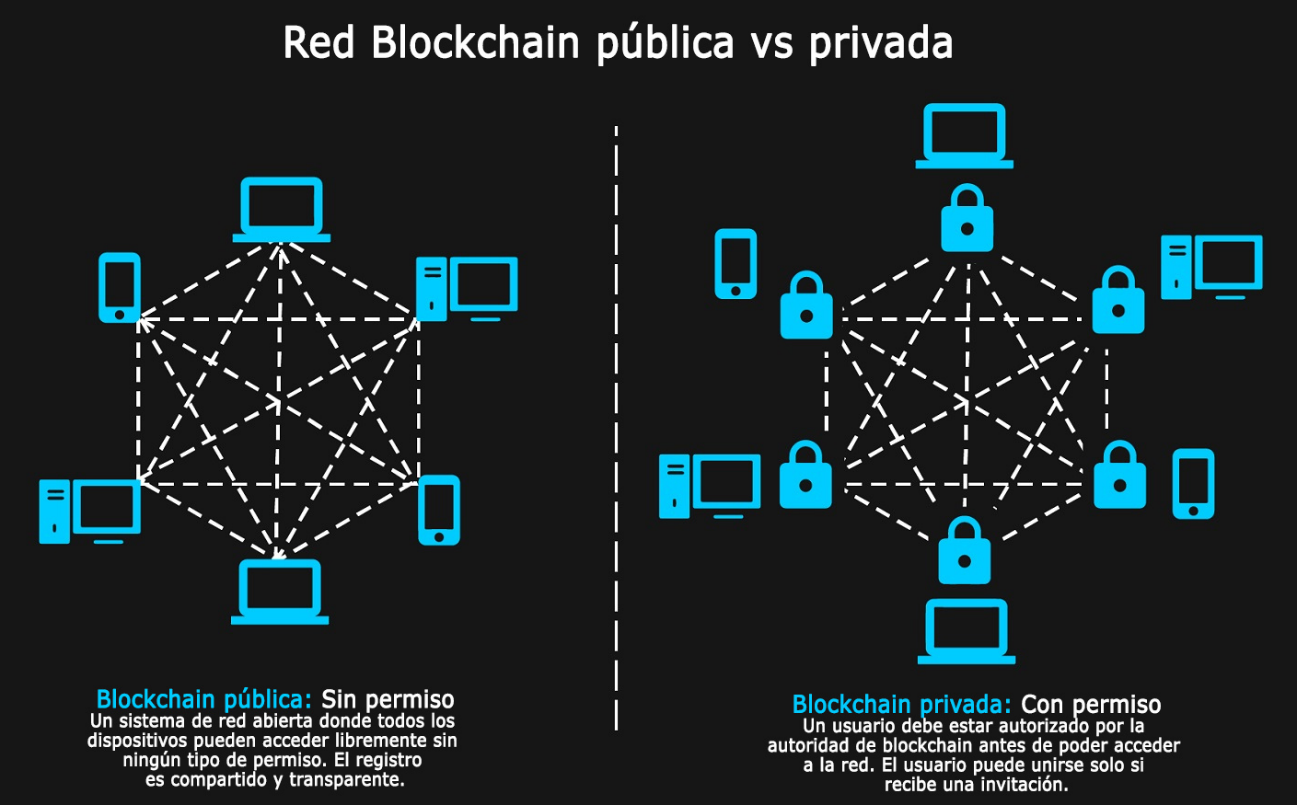 In these networks there is no type of decentralization or consensus since all information is controlled by a single entity that manages the network. Most of the community does not consider these networks as true blockchain, since it does not fulfill practically any of the purposes for which this technology is ideally used.

The same softwares that are used for federated blockchain are also used for private blockchain, since it only changes the mode of permitting (accessibility).

Some large companies offer blockchain services in the cloud. Some examples are IBM specialized in Hyperledger Fabric, Amazon collaborating with Digital Currency Group, or Microsoft offering services of R3, Hyperledger Fabric or Quorum, among others. These services not only consist of storage of information, in this case the blockchain, but also offer an increase in security, no need to invest in hardware and the possibility of a friendlier environment to work with, creating your own blockchain channel without the need to program.

There are other approaches, such as the one we propose from iCommunity Labs through its BaaS platform “iCommunity Blockchain Solutuions” or iBS, where we go one step further: in addition to providing the services offered by IBM, Amazon, Oracle or Microsoft, iBS is a platform that provides “turnkey” solutions through different verticals or use cases, which allows us to carry out integral proposals in which we integrate one or more of these verticals, thus offering our clients more complete solutions that allow solving more problems complex, without having to tackle costly and long processes of development or integration with their backoffice. It is the perfect solution for all types of companies, but especially for those with little or no ICT resources, which otherwise would not have access to this technology.

Do you have a business? Would you like to validate the potential of blockchain to make it more profitable and efficient?

At iCommunity, we know that the key is not to invest to invest in revolutionary systems, but to study in depth the needs of companies, assess the possibilities and evaluate the return that each innovation will have.

Our solutions provide real benefits, which can boost your company by making it more profitable and competitive.

Tell us about your project and we will advise you without obligation.

Yes! I want to transform my company.